Vettel Homage to Schumacher as Nurburgring Fans Shiver in Fog 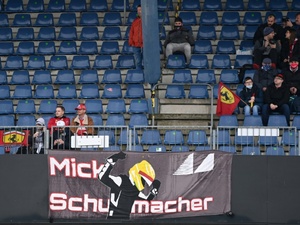 Fans left shivering in isolation at the Eifel Grand Prix on Friday may have had no track action to enjoy, but they did have a sneak insight into Sebastian Vettel's admiration for fellow-German Michael Schumacher.

Ferrari driver Vettel has never hidden his feelings about seven-time champion Michael and has been a supporter of Ferrari junior academy driver Mick’s bid to reach F1.

The younger Schumacher, who is leader of this year's Formula Two series, was scheduled to make his F1 debut in Friday morning’s opening practice with Alfa Romeo, but the session, like the rest of the day, was wiped out by weather conditions that prevented the circuit’s medical helicopter from flying.

Vettel took advantage of an opportunity to console the youngster and show him his helmet which carried a special tribute to his father.

The helmet featured his usual colors and included a raised surface that outlined Michael Schumacher’s helmet design as used when he won the 2006 European Grand Prix at the Nurburgring.

Vettel explained to reporters, after his lengthy chat with Mick Schumacher, that he wanted to show support for him in the prolonged absence of his father Michael, who suffered severe head injuries after a skiing accident in 2013.

Mick was with him at the time.

"I think Mick deserves his shot this weekend and maybe hopefully a race seat next year. It’s what I wish for him – he’s been having a great season and he’s leading the F2 championship.

"I think he’s a great kid and I really like him. I am sure he’s going to go a long way and do well."