March 14 Believes Miqati’s Stand towards its Demands is Unclear 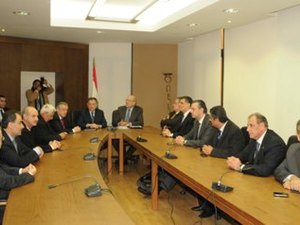 The March 14 camp is still awaiting Prime Minister-designate Najib Miqati’s response to its demands on the Special Tribunal for Lebanon and arms possession in Lebanon and it has therefore not yet reached a final position on whether it will participate in the new Cabinet.

Miqati’s sources told the pan-Arab daily Asharq al-Awsat Sunday that a “calm” dialogue is underway with the camp away from the media spotlight despite some escalatory statements being issued by some members of the coalition.

A prominent March 14 source told the daily An Nahar Sunday that “he does not see a clear position from Miqati towards the demands.”

“Its demands are clear, but so far we have not received a clear response from Miqati over them and therefore, we cannot establish anything on unclear positions,” it added.

March 14 circles told the daily that contacts with the premier-designate are ongoing over whether he will commit to the camp’s demands and over the ministerial statement.

Observers told the Syrian al-Watan newspaper that the March 14 camp is likely to officially inform Miqati within 24 hours that it will not participate in the new government.

Caretaker Prime Minister Saad Hariri’s adviser Mohammad Shatah told Asharq al-Awsat however that the Mustaqbal parliamentary bloc and the March 14 camp have not reached a decisive stand over participating in government.

“Our initial inclination is not to participate and for us to turn into an opposition, which will be the basis of our dispute with the other camp,” he said.

“If this new government will become a tool for the March 8 camp to settle its issues with the STL and other affairs, then Miqati would have gone down a dangerous route, which is definitely much more dangerous than the problem of forming a government,” he stressed.

Close sources to the Mustqabal movement revealed to the Saudi al-Watan newspaper that “all ongoing consultations over the new government have not yielded any positive results because of the other camp’s insistence to control all its aspects.”

“The only way to end the crisis lies in Miqati removing himself from Hizbullah and its allies’ grasp, should he fail, then he should apologize for it,” they continued.

Meanwhile, a March 14 MP who was left unnamed told the Kuwaiti al-Anbaa newspaper: “It is almost certain that France and Qatar facilitated Miqati’s appointment to his current position in order to avert any development that would have happened should Hariri have been appointed as a new premier.”