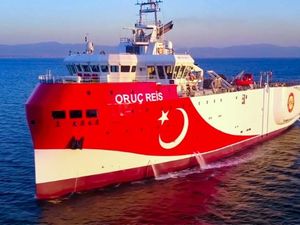 Greece on Monday condemned as a "direct threat to regional peace" Turkey's decision to send back to the eastern Mediterranean the research ship at the centre of tensions over energy rights.

The move which comes as Athens and Ankara are trying to set a date for talks to defuse the row between the two NATO neighbours.

The Turkish navy on Sunday said the Oruc Reis vessel would carry out activities in the region, including the south of the Greek island of Kastellorizo, from Monday until October 22 in a message sent to the maritime alert system NAVTEX.

Greece's foreign ministry said the move was a "direct threat to regional peace and security".

Turkey was "unreliable" and "does not sincerely desire dialogue", it said in a statement.

It added that Ankara was "the foremost factor of instability" in the region "from Libya to the Aegean and Cyprus, Syria, Iraq and now Nagorno-Karabakh."

"I'm not looking for a fight, nobody should," Greek Prime Minister Kyriakos Mitsotakis said in a Monday interview with Greek daily Ta Nea that was conducted before Turkey announced its move.

Turkey and Greece were locked in a row over gas exploration in the eastern Mediterranean in August, which saw the two countries stage rival air and navy drills in strategic waters between Cyprus and the Greek island of Crete.