Floods, Rough Seas Kill 18 in Vietnam as Fresh Storm on the Way 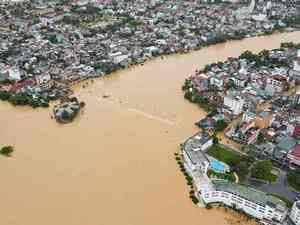 At least 18 people died and more than a dozen are missing after floods submerged homes in central Vietnam and rough seas capsized fishing boats, authorities said Monday, as another storm threatened fresh downpours.

Images on state media showed entire villages under water in Quang Tri and Quang Nam, while murky floodwaters swept through the Imperial City of Hue and the tourist hotspot Hoi An over the weekend.

More than a hundred thousand homes have been submerged in the floods and nearly 46,000 people evacuated, Vietnam's disaster management authority said.

The military staged a dramatic helicopter rescue of eight fishermen who had been swept away by rough seas off Quang Tri province.

Among the dead are three fishermen, however, and three others are missing.

Vietnam is frequently lashed by harsh weather in the rainy season between June and November, with central coast areas most vulnerable.

The country is bracing for another storm rolling in from the South China Sea, with heavy rain again expected.

Some 132 people were reported dead or missing due to natural disasters in Vietnam last year, according to the General Statistics Office.