The Life of Ghosn: Fugitive Tycoon to Star in Screen Productions 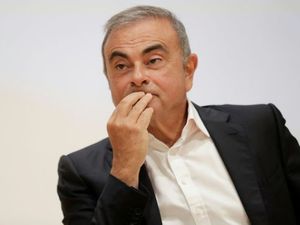 Fugitive auto tycoon Carlos Ghosn and his wife will take part in a documentary and a mini-series about his life, co-producers Alef One of France and MBC of Saudi Arabia said Monday.

The ex-Nissan chief was arrested in Japan in November 2018 on financial misconduct charges and spent 130 days in detention, before he dramatically jumped bail and smuggled himself out of the country late last year.

The 66-year-old businessman for the first time appeared in public in Lebanon in January, claiming he was a victim of a plot by Nissan and Japanese officials.

The documentary and six-part series will trace Ghosn's colorful story, "from his status as one of the most powerful bosses in the automobile industry to that of Japan's most wanted fugitive after his escape to Lebanon where he now resides," the producers said.

"Both productions will include exclusive contributions by Carlos and Carole Ghosn," they said in a statement.

Shooting for the documentary started last month in Beirut and is to continue until the end of the year on location in France, Japan and the United States, said the producers, and will include interviews with the Ghosn couple and other key figures.

The mini-series comprising six one-hour episodes will be based on a screenplay supervised by Mark Goffman, who was a writer for "The West Wing" and, more recently, the executive producer for the Netflix series "The Umbrella Academy".

The Ghosn series, to be shot in 2021, will be directed by Charlotte Brandstrom, of "Conspiracy of Silence" and "Madam Secretary" fame.