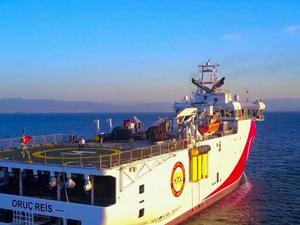 Germany on Tuesday called on Turkey to end a "cycle of detente and provocation" in the Mediterranean, after Ankara's decision to redeploy a research ship at the centre of tensions with Greece over energy and maritime rights.

"If there should be renewed Turkish gas exploration in the more controversial sea areas in the eastern Mediterranean, this would be a serious setback for efforts to de-escalate," Foreign Minister Heiko Maas said ahead of a trip to Cyprus and Greece.

"Ankara must end the cycle of detente and provocation if the government is interested in talks," said Maas, whose country heads the rotating presidency of the European Union.

Turkey on Monday raised tensions with its neighbours after it said it would return the seismic research vessel, Oruc Reis, into the eastern Mediterranean.

The ship triggered diplomatic tensions and rival naval manoeuvres in August when it searched for oil and gas deposits, before Turkey pulled it back to shore last month.

Maas said he assured EU partners Greece and Cyprus had Germany's "full solidarity" and urged Turkey to ensure that dialogue with Greece was not thwarted by "unilateral measures".

Discussions on the escalating situation could take place at the EU summit starting Thursday this week.