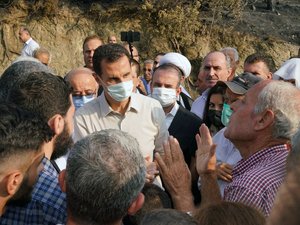 Syrian President Bashar Assad has made a rare public visit to the coastal province of Latakia where he toured areas that suffered heavy damage in last week's wildfires that killed three people, state media reported Tuesday.

Assad's public visits to areas around Syria have been rare since the country's conflict began in March 2011. The conflict has killed nearly 400,000 and displaced half of Syria's population including more than five million who became refugees, mostly in neighboring countries.

State news agency SANA said Assad visited the village of Ballouran to inspect the damage and met the local population during a tour to some areas that were affected by the fires, which were brought under control on Sunday.

SANA did not say whether the visit took place on Tuesday or earlier.

SANA said Assad was accompanied by the ministers of local administration and agriculture and vowed to help residents replant the burnt areas.

Wildfires broke out in several Middle Eastern countries last week amid a heat wave that is unusual for this time of the year, leaving Syria particularly hard-hit. Three people were killed in the wildfires that also burned wide areas of forests, mostly in Latakia and the central province of Homs.

On Saturday, special prayers for rain were held in mosques around different parts of Syria, in hopes that rain would ease the drought and stop the fires.

Assad's hometown of Qardaha in Latakia province was hard hit by the fires that heavily damaged a building used as storage for the state-owned tobacco company, part of which collapsed.

Won't someone shoot this Butcher!?

No, he is there to stay. Keep crying

Aoun in libano. Asad in syria. Khomeini in Iran. Cretins are safe.

Aoun in libano. Asad in syria. Khomeini in Iran. Cretins are safe.