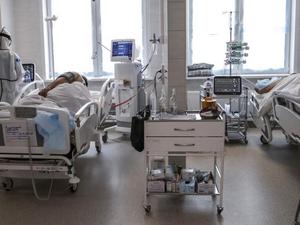 Russia reported on Tuesday its highest-ever number of daily deaths and cases of people infected with Covid-19, fuelling concerns that a second wave of the pandemic is hitting the country.

There were 13,868 new infections and 244 virus deaths, the government's coronavirus crisis centre said, with both figures surpassing previous records set since the start of the outbreak.

With the fourth-highest infection tally in the world, Russia has recorded just under 23,000 fatalities since the start of the pandemic -- a much lower figure compared to other badly-hit countries.

Officials have earlier said they are only counting deaths directly caused by the virus leading critics to accuse Russia of under-reporting Covid mortality to downplay the scale of the situation.

Although virus cases in Russia have been on the rise for several weeks, authorities are reluctant to again introduce strict lockdown measures.

At the start of the pandemic, Russia imposed sweeping restrictions, shutting all non-essential businesses and controlling the movements of infected individuals using a tracking app.

Most restrictions were lifted in June ahead of a vote on constitutional amendments which could see Putin stay in power until 2036.

Certain measures have been reimposed in the capital Moscow, which accounts for roughly 30 percent of the country's caseload.

Last week, Moscow mayor Sergei Sobyanin said the city is making the "necessary decisions" and called on residents to limit movements until a vaccine is available for mass distribution.

In August, Russia announced the registration of what it claimed was the world's first coronavirus vaccine, named Sputnik V after the Soviet-era satellite. A number of officials have said they volunteered for inoculation.

The vaccine is currently undergoing its post-registration trials in which some 40,000 volunteers are taking part.