Turkey Hits Out at European 'Arrogance' over Syria 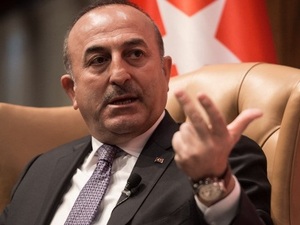 Turkey on Tuesday slammed what it called "arrogant" EU calls for Ankara to withdraw from Syria, accusing the bloc of "double standards."

"To use the word 'urge' is arrogant and incorrect in diplomacy," Cavusoglu snapped during a news conference in Ankara with Linde standing alongside him.

"You try to teach Turkey about international law and human rights ... but you practice double standards."

Since 2016, Turkey has launched three military operations in northern Syria to drive out Syrian Kurdish militia forces deemed as "terrorists" by Ankara.

Turkey says they are linked to the outlawed Kurdistan Workers' Party (PKK) which has waged a bloody insurgency against the state since 1984.

Cavusoglu said Turkish withdrawal from northern Syria would mean backing the PKK listed as a terror group by Ankara and its Western allies.

"Are you asking Turkey to withdraw from Idlib? No, because in this case refugees would flock to Europe," he said.

Ankara has also deployed forces in several military posts it established in northwestern Idlib as part of a 2018 deal with regime ally Russia.