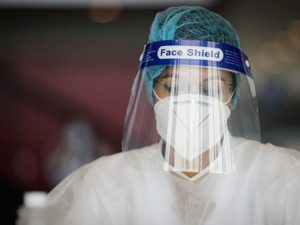 New cases of coronavirus infections in Germany have soared to 6,638 in the past 24 hours, official data showed Thursday, reaching a daily level not seen since the start of the pandemic.

The alarming jump in numbers came just hours after Chancellor Angela Merkel met with the leaders of Germany's 16 federal states to agree tougher restrictions designed to slow the spread of the contagion.

The highest number of new cases previously recorded in one day was 6,294, on March 28, according to figures from the Robert Koch Institute disease control centre.

Under the new measures, if an area records more than 35 new infections per 100,000 people over seven days, masks will become mandatory in all places where people have close contact.

"We must therefore prevent an uncontrolled or exponential increase."

The number of people allowed to gather will also be limited to 25 in public and 15 in private spaces.

Once a threshold of 50 new infections per 100,000 is exceeded, even tougher restrictions will apply.

These include limiting private gatherings to 10 people or two households, and the closure of restaurants after 11:00 pm.

Even more curbs could be imposed if the upwards trajectory of new infections is maintained, Merkel warned.

"We will see if what we've done today is enough," she said after Wednesday's decisions.