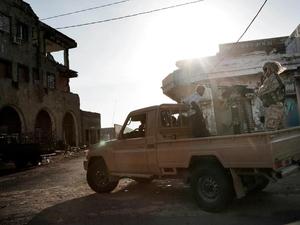 The swap was a rare sign of progress in efforts to end the conflict which broke out six years ago in Yemen, where the Huthis control much of the north despite the intervention of Saudi Arabia and its allies.

In the rebel-held capital of Sanaa, the returning fighters arrived to a red-carpet welcome, greeted by a military band and senior officials standing together with family members.

"Death to America, Death to Israel," they shouted, the slogan of the Huthis who have battled the government and the might of the Saudi-led coalition.

The warring sides agreed to exchange 1,081 prisoners under a deal struck in Switzerland last month, the largest number since the start of the war in 2014.

The International Committee of the Red Cross, which is handling the logistics of the complex two-day operation, said that five planes had so far taken some 484 combatants to cities in Yemen and Saudi Arabia.

The flights shuttled between Sanaa, the government-held city of Seiyun, and the Saudi cities of Riyadh and Abha, it said.

"Today's release operation, led by the ICRC, is another sign that peaceful dialogue can deliver," he said.

"I hope the parties will soon reconvene under UN auspices to discuss the release of all conflict-related prisoners and detainees."

The ICRC said its teams had kitted out the detainees with clothes, hygiene supplies and money for their transport home.

"The ICRC has been conducting one-on-one interviews and medical checks with the detainees to be sure they want to be transported home and are healthy enough to do so," a spokeswoman said.

An AFP correspondent watched the first planes depart from the capital.

One of them arrived in Riyadh with 19 prisoners of war on board -- 15 Saudis and four Sudanese -- from the ranks of the coalition that supports the Yemeni government, rebel officials and Saudi state TV said.

The coalition thanked the ICRC for facilitating the release which it says was a "humanitarian" issue rather than a military one. Sudan is part of the Saudi-led military alliance.

The Yemeni government and the Iran-backed rebels resolved to swap some 15,000 detainees as part of a peace deal brokered by the UN in Sweden back in 2018.

The two sides have since undertaken sporadic prisoner exchanges, but this week's swap is the first large-scale handover since the war began.

The exchange comes after the release Wednesday of two Americans held captive in Yemen, in an apparent swap for some 240 Huthi supporters who were allowed to return home after being stranded in neighboring Oman.

The rebels also sent back the remains of a third American who died in captivity.

The fate of the 240 Yemenis, who had travelled to Oman for medical treatment in what was supposed to be a confidence-building move during the 2018 talks in Sweden, had become a major grievance for the rebels and a symbol of the deep distrust between the two sides.