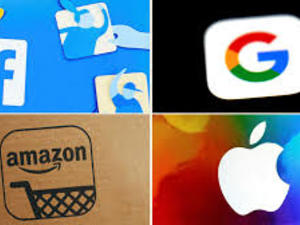 France and the Netherlands jointly urged EU regulators on Thursday to limit the power of Silicon Valley giants like Google and Facebook, and break them up if necessary.

Firms such as these as well as Amazon and Apple have immense power over companies wishing to access consumers using their platforms and concerns have grown about how they use it.

A recent example was Apple pulling the massively popular online shooter game Fortnite from its apps marketplace after its publisher Epic released an update that dodges sharing revenue with the iPhone maker, triggering a legal battle in the US.

Meanwhile, some companies that sell on Amazon's online marketplace have grumbled that it uses information it gains on sales to compete against them and places undue restrictions on them.

French digital minister Cedric O and Dutch counterpart Mona Keijzer said in a joint paper that Brussels should "regulate too-powerful large digital platforms" that can act as a gatekeeper to the internet and consumers.

But she warned that some platforms might become too powerful.

"Their market positions become increasingly difficult to challenge and damage can be hard to reverse."

The Franco-Dutch proposal would give EU regulators "the possibility of imposing both access obligations and behavioural obligations and prohibitions on a case-by-case basis".

Another possible measure is the prohibition of "distortionary self-preferencing" where digital platforms favour their own services above others.

France's O said European Commission regulators should be able to take tailor-made approaches when looking at internet platforms in order to "break them open" if necessary to "ensure freedom of choice for consumers".

The call for action comes as the European Commission is due to unveil its new Digital Services Act by the end of the year to regulate tech firms like Google, Amazon, Facebook and Apple.

EU Internal Markets and Digital Commissioner Thierry Breton however recently said that regulating US tech firms should be the job of individual European Union countries, and ruled out creating an EU agency to do so instead.

The joint proposal is an unusual alliance between Paris and The Hague, which often sit at opposite ends of the divide between statist and liberal competition policy.