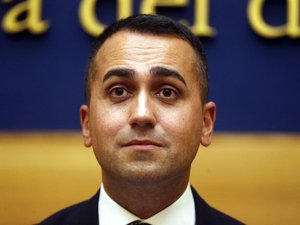 Italy's foreign minister pledged Thursday to bring home 18 fishermen detained in Libya since the start of September, in an escalation of the so-called Mediterranean "prawn war".

The men, who set sail from Sicily, were intercepted by Libyan patrol boats for allegedly fishing in territorial waters, and were taken to Benghazi in Libya, where the region's leader Khalifa Haftar reportedly ordered them locked up.

"Our fishermen are being held by a Libyan party not recognized by the Italian government, the European Union or the United Nations," foreign minister Luigi di Maio told the Senate during question time.

"It is our aim to bring them home as soon as possible," he said.

Concern has mounted in Italy over the fate of the men -- eight Italians, six Tunisians, two Indonesians and two Senegalese -- who were seized September 1 along with their boats, the Antartide and Medinea.

Di Maio said the men appeared to have been detained over the alleged violation of a "protected fishing zone", an area of sea extending 74 miles from the coast and unilaterally claimed by Libya in 2005 as its own.

Benghazi authorities passed the case to the military prosecutor's office on September 31 because the incident took place in what is considered a military zone, Italy's parliamentary relations minister Federico D'Inca said last week.

The area is also a fishing ground for the gambero rosso, or red prawn, a crustacean prized by gourmet chefs and which can sell for up to 60 euros a kilogram at the fishmongers.

Families from Mazara del Vallo, on the west coast of Sicily, have been fishing the prawns since the 1900s.

"The area has been the site of numerous incidents (over the years), from the interception and seizure of fishing boats to the detention of crews, and even attacks" by Libyan vessels, Di Maio said on Thursday.

The Italian media has dubbed it "the prawn war".

Di Maio said he had called on those "who have particular influence on Benghazi" for help, including his counterparts in France, the United States, the United Arab Emirates and Russia.

"We are monitoring the fishermen's health daily. They are well. They are not being held in a prison but an independent structure, they have no contact with prisoners, they are being treated well," he said.

But the fishermen's families believe the men are being kept by Haftar as a bargaining tool and will only be released in exchange for four Libyan footballers.

The Libyans were arrested in Sicily in 2015 and sentenced to 30 years in jail for people trafficking, after a court found them guilty of locking migrants below deck on a rough sea crossing to Italy in which 49 people died.

Their lawyers claim they were asylum seekers fleeing the conflict-torn North African country.

D'Inca told parliament that "the reported request to swap the fishermen with four Libyan citizens jailed in Italy has neither been confirmed not formally made."