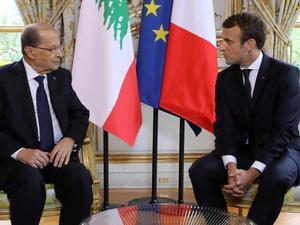 The daily said Aoun told Macron his move was aimed at getting a “broad Christian” backing for the candidate and ex-PM Saad Hariri.

But Aoun’s call did not “dispel” the French’s annoyance over the postponement of consultations, according to the newspaper.

Had it been held on Thursday as planned, the consultations would have ensured that political parties were still willing to abide by the French initiative towards Lebanon, it said.

“France was extremely disturbed by the ill-considered step that would plunge the country into a new round of political disputes, not only to float the initiative launched by President Emmanuel Macron, but to prevent Lebanon from disappearing,” political sources told the daily on condition of anonymity.

Aoun postponed the consultations to next Thursday because he was reportedly seeking the backing of the two largest Christian blocs in parliament, the Lebanese Forces and the Free Patriotic Movement- a party founded by Aoun.

But LF leader Samir Geagea on Thursday renewed his call for organizing early parliamentary elections as a way out of the political crisis.

lol @ to ‘Justify’ Delay in Consultations

Mecca refugees and Najaf refugees conspiring against crestins of libano. Suberman Bassil to the rescue of crestins! Lady gaga ? In Baris.

Who is he kidding. There is no justification whatsoever in the delay of consultations to form the new government.
Even the French understand that as long as Hizballah and Amal demand that the Finance Ministry be in their hands, there is no possible way forward.
No way forward, no assistance. As simple as that.

Waiting for the resuls of the US elections i presume, the pols will clear out more middle of next week as we get closer to super tuesday in november and this way they will know with whom they are dealing in the future.