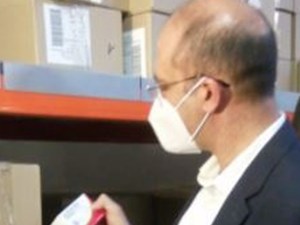 Caretaker Health Minister Hamad Hassan resumed his inspection tour of pharmacists and medication warehouses on Friday amid a shortage in medicine supply and reports they are being monopolized and smuggled outside Lebanon.

“As a result of the raids we made, we found out that there is discretion and monopolization of certain medication brands only limited to some pharmacies,” Hassan said inspecting warehouses in the Baabda district.

He stressed saying that “immediate measures will be taken against anyone who tampers with people's health.”

On Thursday, Hassan made the same inspection in Zahle district and other Bekaa areas where some of the pharmacies and depots were ordered to be sealed with red wax by Bekaa Attorney General Munif Barakat.

Hassan assured that all needed measures to distribute medications equally among Lebanese regions will be taken, mainly the ones subsidized by the Central Bank of Lebanon.

The Central Bank plans to cut subsidies on main commodities including medicines, wheat and fuel over a depreciation foreign reserves.

The decision sparked outcry among Lebanese already reeling from an economic crisis and a devastating Beirut port explosion sending many into poverty.

Dear Caretaker Health Minister Hamad Hassan, it is pretty easy; you catch the smugglers, you round them up, you line them up and you order to put a bullet between the eyes of each one of them, then I guarantee you, you shall have results.

But the smugglers are Amal and Hizbala members... don't be na7eef Geralt :)