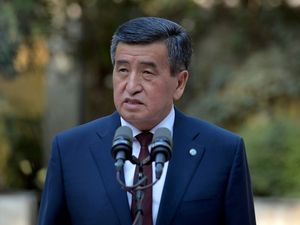 Kyrgyzstan's former and acting presidents on Friday addressed parliament to end a political crisis over a disputed October vote, which electoral authorities said could be repeated before the end of the year.

Sooronbay Jeenbekov on Thursday became the third Kyrgyz president to resign since 2005, in a move that he said he hoped would spare the ex-Soviet country further bloodshed.

One person died and more than 1,200 people were injured during clashes between protesters and police after parliamentary elections on October 4, which opponents say was rigged.

The vote was annulled but it did not ease the threat of a power vacuum opening in the sometimes volatile Central Asian state.

Speaking in parliament, Jeenbekov confirmed his resignation and said he was "clean before the Almighty and the people". MPs applauded him as he left the room.

His departure means that recently-appointed Prime Minister Sadyr Japarov assumes presidential powers on an interim basis, since the parliamentary speaker refused the post.

He told parliament that the government is "changing peacefully, and we should be grateful to God for that.

"I will make every effort to maintain foreign policy and other important vectors," he said.

But a lawmaker who spoke afterwards warned him that he would not be able to run for president as per the constitution and said it was unprecedented for a Kyrgyz official to hold both positions.

"Fate gives you such a test and opportunity. We wish you the best of luck and will support you," said Omurbek Tekebayev, who was seen as driving constitutional changes after the country's 2010 revolution.

None of the lawmakers spoke out against Japarov, whose supporters have massed in the capital since the crisis began.

Japarov was among several prominent figures sprung from jail during the unrest. He was serving time for hostage-taking and has been suspected of ties to organised crime, which he has denied.

The dates have yet to be confirmed.

Kyrgyzstan has been dogged by political volatility for much of the three decades since it became independent in 1991.