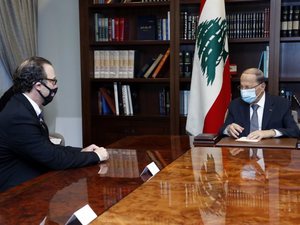 President Michel Aoun met with U.S. Assistant Secretary of State for Middle Eastern Affairs David Schenker on Friday in Baabda, and hailed the US mediation role between Lebanon and Israel on their maritime sea border, the Presidency media office reported.

Aoun informed Schenker that Lebanon “Heavily relies on the US mediating role to reach just solutions during the negotiations which began a few days ago to demarcate the southern maritime borders”, considering “this role can help overcome difficulties which may hinder the negotiation process”.

Aoun also thanked the United States for its support for Lebanon after the Beirut Port explosion, and the aid sent to the affected.

Aoun assured Schenker that work is ongoing to establish a clean Government focused on necessary reforms to advance the country from the existing deterioration in economic and financial conditions.

He stressed the importance of forensic audit into the Central Bank’s accounts, considered an essential step in the reform process and in restoring the state’s rights.

Aoun also highlighted the issue of displaced Syrians in Lebanon and negative repercussions on the public sectors. He hoped the US would facilitate their return to their homeland.

For his part, Schenker said the US will continue its mediation role in the demarcation talks between Lebanon and Israel, hoping these negotiations would yield positive results as soon as possible.

Schenker also praised the positive role which Aoun plays in leading the fight against corruption and changing the approach that prevailed in the past, considering that reforms in Lebanon are essential.

Then, Ambassador Schenker expressed hope that a productive Government would be formed to achieve the necessary economic reforms, added the Presidency.

I'm surprised that during their talks President Aoun didn't say "talks between Lebanon and Who?" The very fact that he mentions Israel is further proof that slowly but surely the Republic of Lebanon is finally (after 72 years) learning to accept and live with the undisputed evidence that the State of Israel exists on its southern border.