Thai Protesters Vow to Return to Streets after Friday Clashes 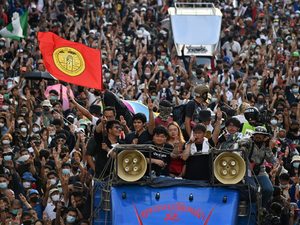 About 3,000 demonstrators in the city's main shopping mall district demanded the release of arrested protesters, and some shouted obscenities against Prime Minister Prayut Chan-O-Cha before they were dispersed by police.

Free Youth, one of the main protest groups, Saturday morning called on its supporters to return to the streets later Saturday.

"Be prepared both physically and mentally for the demonstration and to cope with a crackdown if it happens," the group's online post said.

Several hundred riot police dispersed the protesters Friday by firing blue-dyed water laced with a chemical agent from the cannons.

The youth-led movement has jolted the kingdom's political elite with its demands for the government to step down and reforms of the previously unassailable monarchy.

The ultra-wealthy and powerful King Maha Vajiralongkorn has not addressed the civil unrest directly but during a ceremony broadcast Friday reminded people that Thailand "needs people who love the country, people who love the institution of the monarchy".

Thai Lawyers for Human Rights told AFP that 65 activists had been arrested since Tuesday, including nine of the most prominent figures of the pro-democracy movement.

Earlier on Friday, two activists were arrested under a rarely used law banning violence against the queen because they were among a group surrounding a royal motorcade on Wednesday during a large demonstration.

Both men could face life in prison if convicted.

A Thai journalist was also briefly detained during Friday's protest, according to his online news outlet, Prachathai.

Premier Prayut has extended the emergency decree banning gatherings of more than four people until mid-November, ignoring activists' calls for him to resign.

The former army chief was the mastermind behind a 2014 coup before being voted into power in last year's election which protesters say was rigged in his favour.

Opposition party Pheu Thai has called on the government to lift emergency measures and free those detained.