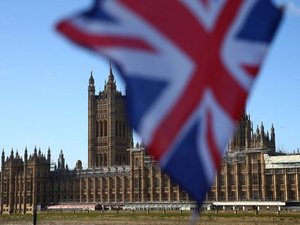 Moody's on Friday cut the rating on Britain's debt a notch to Aa3, citing a weakening economy "exacerbated" by Brexit.

"The UK's economic strength has diminished since we downgraded the rating to Aa2 in September 2017," Moody's said in a statement.

"Growth has been meaningfully weaker than expected and is likely to remain so in the future... exacerbated by the decision to leave the EU and by the UK's subsequent inability to reach a trade deal with the EU."

The British economy also will be "damaged by the scarring that is likely to be the legacy of the coronavirus pandemic, which has severely impacted the UK economy."

The outlook on the debt was changed to stable from negative. The agency also downgraded the Bank of England's rating to Aa3 with a negative outlook.

The news came as talks continued between London and Brussels over the structure of the post-Brexit relationship, with Britain's threat to walk out looming over the discussions.

Britain Prime Minister Boris Johnson said there was no point in holding more talks without a dramatic softening of the EU's position, bringing a step closer the possibility that the planned divorce at the end of the year will end acrimoniously.

The ratings agency said even with a trade deal with the EU by the end of the year, "it will likely be narrow in scope and therefore the UK's exit from the EU will, in Moody's view, continue to put downward pressure on private investment and economic growth."

"Even before the coronavirus-induced shock, a combination of persistently low productivity growth since the global financial crisis, tepid business investment since the June 2016 EU referendum" were weighing on growth, the statement said.

Moody's might feel that some in England don't realize that COVID is a gentlemen's joke, not to be taken too illiberally. If you don't have pneumonia when you die "with COVID", you don't die of COVID. You die of the motorcycle crash you just had, or the gunshot wound, or the diabetes on top of emphysema on top of heart disease.