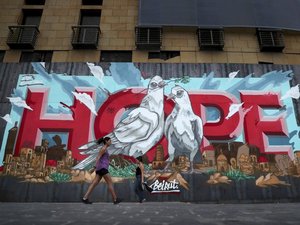 A year ago, hundreds of thousands of Lebanese took to the streets protesting taxes and a rapidly deteriorating economic crisis. A spontaneous and hopeful nationwide movement was born, denouncing an entire political establishment that had for decades pushed Lebanon toward collapse.

Today, as crises multiply and the country dives deeper into uncertainty and poverty, protests seem to have petered out. Even widespread anger over a devastating explosion at Beirut's port on Aug. 4, blamed on government negligence, failed to re-ignite the movement.

It is both bewildering and frustrating for those who believe only a sustained popular uprising can bring change in Lebanon.

Some argue the protests lost momentum because of the political elite's moves to hijack and weaken the movement. Protesters have been met with violence, arrest and intimidation. Others say Lebanese have become numb to incompetence and corruption among the political class.

But Lebanon's confessional-based power-sharing system also proved difficult to bring down. A revolt against the status quo means breaking a sectarian patronage network cultivated by the ruling elite that many in the divided population benefit from. Even if dissatisfied, some blame other factions for the country's problems or fear change will give another sect power over them — a fear politicians eagerly stoke.

"We don't have one head of state, it's a group of men, they have agreed to divide the spoils of the state at every level. It's a system that you can hardly topple," said Carmen Geha, associate professor in public administration and an activist. She compared the dismantling of Lebanon's system to the dismantling of Apartheid in South Africa, a long and arduous process.

For all its limitations, the protest movement that erupted on Oct. 17, 2019 had successes.

Even after street demonstrations dissipated, grassroots networks quickly mobilized following the Beirut explosion, which killed nearly 200 and wrecked tens of thousands of homes. Authorities almost completely left the public on its own to deal with the aftermath, with no government clean-up crews in the streets and little outreach to those whose homes or businesses were wrecked.

So activists stepped in and took charge of rebuilding.

"You find people more mobilized toward helping each other ... that is another face of the revolution," Geha said. "We need to show people how inept politicians are and provide them with an alternative system, one focused on services."

The protests showed Lebanese could march against politicians of their own sect. In unprecedented scenes, large crowds turned out even in cities like Tripoli, Sidon and Nabatiyeh, which have been strongly affiliated to traditional sectarian parties, including Hezbollah. Politicians considered untouchable gained something of a pariah status, named and shamed in public or even chased out of restaurants.

"We broke the sectarian barriers and the taboo of opposing these warlords, we broke their halo," said Taymour Jreissati, once a prominent protester, now living in France. Jreissati left in the summer, for the sake of his children, he said, and after being threatened by politicians and security agencies.

Two governments were toppled under the pressure of the streets -- one last October, the other right after the Beirut explosion.

Jad Chaaban, an economist and activist, says the protest movement was thwarted by the political elite.

"The politicians cemented their alliances again and distributed the roles to protect each other," he said. "The counter-revolution was at the level of the economy, allowing it to deteriorate .. (and) on the streets through a fierce police crackdown."

The political factions in power have generally claimed to support the protesters' goals of reform and an end to corruption. At the same time, they have made no move to enact reform, often depicting the protesters as agents of instability.

In a speech to his party faithful last week, former Foreign Minister Gebran Bassil -- who is the son-in-law of the president and who was particularly vilified in protesters' chants as a symbol of the ruling class -- called on "the true, sincere movement" to join his party in forming a program of change. But he also warned that Lebanese are threatened "with being brainwashed by 'revolutions' fabricated and financed from abroad."

The protest movement also failed to offer solid leadership. From the start, protesters shunned calls to do so, worried leaders could be targeted or co-opted. With time, that absence became a constraint.

Some experts see the protesters' chief demand as unrealistic — typified in the chant, "All of them means all of them," meaning all politicians in the establishment must step down.

That addressed the wrong issue and was "a dilution of the problem," said Nadim Shehadi, from the London-based think tank Chatham House.

"The problem in Lebanon is not the system of governance, it has its flaws but it is not the cause of the problem, Hezbollah is," said Shehadi, who is also executive director of the New York headquarters and academic center at the Lebanese American University.

At various protests, supporters of the Iranian-backed Hezbollah and its Shiite ally Amal attacked demonstrators. Hezbollah and its political allies have also snarled efforts to form a more reformist government since the port explosion — wary, critics say, of changes that could impact its strength as an independent armed force and support system for its Shiite community.

The uprising tripped over a myriad of crises. The coronavirus pandemic undermined turnout. The breakdown of the economy — and then the port explosion — threw people into survival mode, drained by their inability to make ends meet.

People may eventually go back to street protests. The Central Bank is expected to end subsidies of basic goods in coming weeks, throwing more people into poverty.

But many activists now focus on the grassroots level, building an alternative to the patronage system to deliver basic needs. With time, they hope more people will break with their traditional leadership.

"It's a long road," says activist Lina Boubess, a 60-year-old mother who has not missed one protest since October.

"I am the civil war generation, but this new generation gives me hope. I believe in a tomorrow, I don't want to give up."

Yes Hezbollah attacked the protesters but they don’t scare us we will disarm them!!. And gebran bassil be quiet protesters are not getting brainwashed and funded from abroad stop lying you devil.