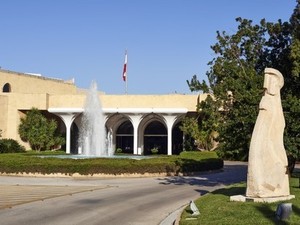 France has reportedly renewed calls on Lebanese officials to agree on the formation of a reform government, considering that it was time to "choose to rise up rather than paralysis and chaos,” LBCI reported on Saturday.

LBCI said the French Foreign Ministry said in a statement that “the formation of a mission government capable of implementing the necessary reforms is still postponed, despite the commitments made and reaffirmed by all Lebanese political forces,” in Lebanon.

The statement blamed Lebanese officials for the “prolonged obstruction preventing any response for the demands long expressed by Lebanese,” affirming that Paris “is ready to help Lebanon with reforms that alone would mobilize the international community."

“It is up to Lebanese officials to choose to rise up instead of paralysis and chaos. The supreme interest of Lebanon and the Lebanese people requires that," added the statement.

Lebanon must appoint a new prime minister, following an unsuccessful first attempt to form an "independent" government demanded by the street and the international community.

After weeks of negotiations, Prime Minister-designate Mustafa Adib, who was chosen at the end of August, abandoned the task of forming a government in the absence of national consensus.

Had a new government been formed, it had to carry out necessary reforms to release international aid within two weeks, according to an announcement made by French President Emmanuel Macron during his visit to Lebanon in early September.

Exceeding that deadline angered the French president, who considered what happened "a collective betrayal" in a speech he gave the day after Adib resigned.

As Hizballah virtually controls Lebanon and all decisions regarding the make up of a working technocrat, non-political cabinet, the chances of growth are very slim if at all existant.
Hizballah and Amal would much prefer chaos to a Lebanon reaching agreements for the reform of the country, not to mention any chance of a peace agreement with Israel.

Time for talking is over. Time for action. These POS do not understand anything but brutal force, so please France do something useful! Sanctions ASAP!!