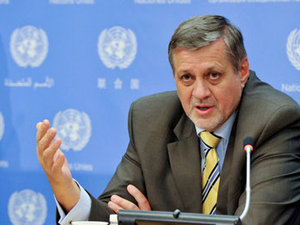 UN Special Coordinator for Lebanon Jan Kubis released a statement marking the first anniversary of the October 17 uprising in Lebanon.

A year ago, a massive wave of national protests started, that at some point brought to the streets hundreds of thousands, even millions of Lebanese across the whole country, across all sectarian and political divides and affiliations, with women and young people at the center, the statement read.

Deeply disappointed in the ruling political elites and confessional system of politics and administration that perpetuate corruption and nepotism, they have raised their voice against the corrupt practices of the past and for deep systemic reforms. They have called for justice, transparency, accountability, equal rights, protection and opportunities for all, for a proper and effective governance, functioning democracy and secular civil state. They shattered many taboos and common myths about what they need and want – and what they reject. In this truly national uprising, the people of Lebanon have stood up for their legitimate aspirations and rights with courage and determination, demanding dignified lives for themselves and their families, a brighter future for their country. After this patriotic awakening, the people’s commitment to and yearning for deep reforms and changes continues to be strong, even if the momentum has receded. They have planted the seeds for systemic changes. One year on, their struggle continues.

We pay tribute to the people of Lebanon and remember the martyrs and injured from among the protesters and the security forces.

Yet the legitimate grievances and needs of the Lebanese have gone unheeded during a harrowing year of ever deepening socio-economic crisis, a deadly pandemic, a traumatic explosion, a steep currency decline, inflation, blocked access of depositors to their money in the Lebanese banks, a collapse of the economy and of businesses amidst political and governance paralysis and the resignation of two governments. All of that has further deepened the lack of trust of Lebanese in their leaders and country, led to widespread angst, demoralization and loss of perspective mixed with anger, opens doors to extremism.

The reforms that Lebanon needs are well-known. The ruling political elites have repeatedly committed to implement them, without delivering on their pledges, thus perpetuating the status-quo and paralysis. Among the urgent needs is social protection for the quickly surging numbers of the poorest and most vulnerable in Lebanon, including women and youth, disproportionately affected by these devastating crises.

To protect and develop Lebanon’s democracy, judicial independence must be more than a repeatedly declared aim.

The country cannot start addressing the existential challenges that Lebanon faces without an effectively functioning pro-reform government that is able, willing and empowered to carry out urgently needed essential reforms on the basis of a clear action plan that will guarantee their implementation and that will work with full transparency and accountability to the people. Lebanon’s international friends also urgently need such committed, credible and reliable partner.

On this day, we recall the freedoms of expression and of peaceful assembly that are enshrined in the Universal Declaration of Human Rights, which Lebanon itself co-authored. We underscore the UN’s full support for the right to peaceful protests as part of freedom of assembly and of expression that must be protected, allowing the people to fully exercise these rights within the rule of law.

The United Nations will continue to stand closely by Lebanon and its people in their pursuit of a just, dignified, prosperous, stable and peaceful future.