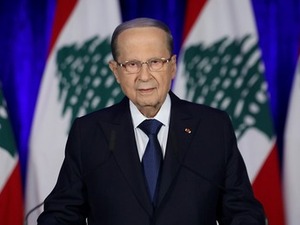 President Michel Aoun marked the first anniversary of the popular movements in Lebanon on Saturday and stressed that reforms are only possible through the government institutions.

“A year has passed since the popular movements began, and my hand is still extended to work together in order to achieve demands for demands,” said Aoun in a tweet.

“No reform is possible outside the government institutions, it is not too late,” he added.

Lebanon marks the first anniversary on Saturday of a non-sectarian protest movement that has rocked the political elite but has yet to achieve its goal of sweeping reform.

Demonstrators plan to march from the main Beirut protest camp towards the port -- the site of a devastating explosion, which has been widely blamed on the alleged corruption and incompetence of the hereditary elite.

1 year later and 5 years into his term in office, ZERO reforms.

Aoun and bassil you guys are full of so much hatred , no humanity in you guys whatsoever!

Looser!
The worst President in Lebanese History! You're a disgrace!