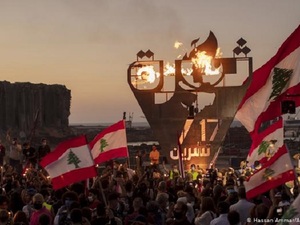 Hundreds marched in Lebanon's capital Saturday to mark the first anniversary of a non-sectarian protest movement that has rocked the political elite but has yet to achieve its goal of sweeping reform.

A whirlwind of hope and despair has gripped the country in the year since protests began, as an economic crisis and a devastating port explosion two months ago pushed Lebanon deeper into decay.

Two governments have resigned since the movement started but the country's barons, many of them warlords from the 1975-1990 civil war, remain firmly in power despite international as well as domestic pressure for change.

On Saturday, hundreds of people brandishing placards and Lebanese flags gathered in Martyrs' Square in the heart of Beirut in a scene reminiscent of last year's rallies.

They later marched towards the stricken port, observing a minute of silence just short of their destination before holding a candlelit vigil near ground zero at 6:07 pm (1507 GMT).

That was the precise time on August 4 when a huge stockpile of ammonium nitrate fertilizer exploded, killing more than 200 people and devastating swathes of the capital -- a disaster widely blamed on the corruption and incompetence of the hereditary elite.

Activists installed a metallic monument at the site to mark the anniversary of their October 17 "revolution".

"For a year, we have been on the streets ... and nothing has changed," said Abed Sabbagh, a protester in his seventies.

"Our demand is the removal of a corrupt political class that continues to compete for posts and seats" despite everything happening in the country, he told AFP from Beirut's main protest camp.

Clashes later broke out between protesters and police, when a handful of demonstrators hurled stones and security forces fired tear gas to break up the crowds, an AFP photographer said.

The immediate trigger for last year's demonstrations was a government move to tax WhatsApp calls, but they swiftly swelled into a nationwide movement demanding an end to a system of confessional power-sharing that protesters say has tarnished public life.

Lebanon's deepest economic downturn since the civil war has led to growing unemployment, poverty and hunger, pushing many to look for better opportunities abroad.

"Our government along with political parties crushed our hopes," said May, a 25-year-old university student.

"We are tired and deeply ruined, they left us no other choice but to leave."

A spiraling coronavirus outbreak since February prompted a ban on public gatherings but even without protesters on the streets public resentment has grown.

The explosion at Beirut port prompted protesters to return to the streets in its aftermath, but the movement then shifted most of its energy to relief operations to fill in for what it sees as an absent state.

The political class has since failed to form a new government that can meet the demands of the street and international donors who have refused to release desperately needed funds.

French President Emmanuel Macron, who visited Lebanon twice in the aftermath of the port blast, said the country's ruling class had "betrayed" the people by failing to act swiftly and decisively.

President Michel Aoun is due to hold consultations with the main factions in parliament next week before designating a new prime minister for the third time in less than a year.

Saad Hariri, who bowed out in the face of the first protests last October, is expected to make a comeback in an appointment that activists are likely to reject.

Aoun on Saturday renewed his call for protest leaders to work with the state and existing institutions -- an appeal repeatedly rebuffed by activists.

The protest movement has maintained a loose structure that some analysts believe could be an impediment.

"The lack of political programs and leadership have made the process and progress rather daunting and difficult," said Jamil Mouawad, who teaches political science at the American University of Beirut.

But academic and former minister Tarek Mitri said that the success of a protest movement "can't be measured by what has been achieved in terms of political change, nor by its ability to generate new political elites, but rather by the promises that it continues to carry, amidst all the pain."