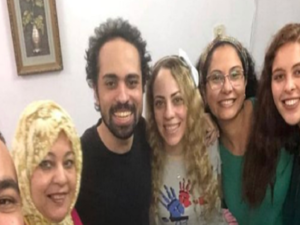 An Egyptian activist and satirist detained for more than two years has been released, his family has announced.

Shady Abu Zeid was arrested in May 2018 and held in pre-trial detention over charges of "membership of a banned group" and "disseminating false news", according to rights group Amnesty International.

"Shady was released under judicial supervision, and is now at home with us," his sister Rola Abu Zeid wrote on Facebook on Saturday.

The Cairo-based Association for Freedom of Thought and Expression (AFTE) said a court specializing in terrorism made the decision on October 10.

Pre-trial detention can last up to two years under Egyptian law, but the period is often extended.

Abu Zeid was part of a satirical television talk show before the authorities halted its broadcast, and he also posted videos on social media.

In 2016, he courted controversy with a video that showed him giving balloons made out of condoms to security forces in Cairo's Tahrir Square on Egypt's national police day.

Rights groups say the government of President Abdel Fattah al-Sisi has been curtailing freedoms since he took office in 2014, after the army's ouster of late Islamist president Mohamed Morsi the year before.

Comedians, academics, bloggers, journalists, political dissidents, lawyers and activists are among those who have been jailed.

According to several rights groups, an estimated 60,000 detainees in Egypt are political prisoners.