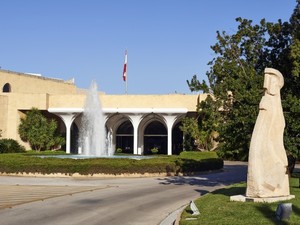 The binding parliamentary consultations to pick a new premier will be held on Thursday and will not be postponed, informed sources said on Sunday.

“The problem because of which the consultations were postponed last Thursday will move to the (cabinet) formation stage, seeing as no blocs can be granted what might be withheld from other blocs,” the sources told LBCI television.

Ex-PM Saad Hariri is expected to be named on Thursday to lead the new government and the country’s main Christian parties -- the Free Patriotic Movement and the Lebanese Forces -- have said that they will not vote for him.

The FPM has argued that Hariri is not a specialist to lead a government formed purely of specialists and on Sunday one of its MPs said the bloc might grant its vote of confidence to the government while reiterating that it will not vote for Hariri.

According to reports, the FPM wants a share if the government will contain politicians in addition to specialists.

RIP Lebanon
Bunch of losers fighting over the carcass of a nation.