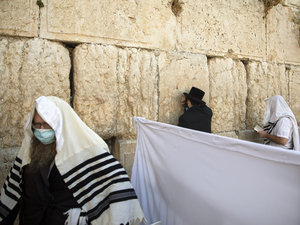 Public radio said about a million young children would return to kindergartens and other facilities Sunday.

Businesses not involving face-to-face contact with the public were allowed back to work, and a contentious ban on individuals moving more than one kilometer from their homes was lifted.

That rule sparked anger among some Israelis who claimed it was designed to stem a wave of protests against Prime Minister Benjamin Netanyahu.

People will now also be able to visit friends or relatives, as long as gatherings are of no more than 10 people if inside, and 20 outside.

The latest lockdown was the second since Israel recorded its first Covid-19 case in February.

Tough restrictions introduced in March were lifted after about two months, but critics of the government have said the easing was premature.

"This time we are moving cautiously," Netanyahu said Saturday.

"The main challenge is still ahead of us," he said in remarks aired on public radio Sunday. "Keep observing the rules."

According to a decision Thursday, a phased lifting of restrictions will take place through to February.

The current lockdown, imposed on September 18, remains in place in several mainly ultra-Orthodox Jewish areas around the country, designated "red" zones of infection.

Influential rabbi Chaim Kanievsky, who himself recently tested positive for the virus, ordered ultra-Orthodox boys' schools to reopen, despite a government ban.

On Saturday, Netanyahu made a direct plea to the most religiously observant.

"Our Torah sanctifies life. We have a Torah of life and we need to safeguard life and health," he said.

"I ask the ultra-Orthodox public to follow these rules."

Israel boasted about its early virus response, which included swiftly stopping international flights, shutting down non-essential businesses and placing the country under lockdown for weeks.

By mid-May, after new daily cases had dropped off considerably, the government had moved to expedite the reopening of schools, bars, eateries and places of worship, as well as allowing weddings, with restricted numbers, but infections quickly resurged.

By the end of last month, the number of new daily cases had soared, at times to over 8,000 -- among the highest rates in the world per capita according to an AFP tally.

But this past week, daily infections largely fell below 2,500, and an official update on Sunday morning showed just 397 new cases recorded the day before.

Israel, a country of about nine million people, has recorded 302,911 coronavirus cases, including 2,202 deaths, as of Sunday.