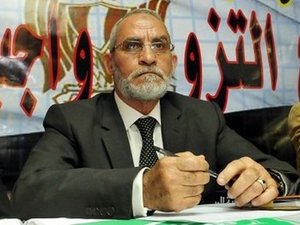 As global pressure mounted for newly appointed Vice President Omar Suleiman to negotiate a peaceful transition to more democratic rule, the government took the historic step of meeting with its most long-standing and powerful foes.

Meanwhile, as new avenues of dialogue opened up on the political front, Egyptian army troops stepped up pressure on the protesters who have occupied central Cairo's Tahrir Square, tightening a cordon around the area.

Undaunted, the protesters celebrated a mass in the square -- the epicenter and symbol of the revolt against the regime -- to remember the estimated 300 people who have been killed since demonstrations against Mubarak began.

Meanwhile, a measure of normal life began to return to the biggest city in the Arab world, with queues forming in front of banks that had been shut for more than a week and workmen scrubbing down shop fronts.

The Brotherhood, a well-organized Islamist movement, has long been banned from Egyptian politics. That Mubarak's camp has been forced to invite its bitter foe to talks is a sign of the opposition's mounting strength.

The state-run MENA news agency confirmed that the talks had begun, and would include the Brotherhood, the liberal Wafd party, the left-leaning Tagammu and members of a committee picked by the youth groups holding the square.

"All present at the meeting held a minute's silence for the martyrs who died during the protests," MENA said.

And Erian warned: "We have been invited. We will go. But our participation is conditional on giving the youth representation. If the demands of the youth are not met, we have the right to reconsider our position."

The Brotherhood is officially banned in Egypt, but its vast social aid network is tolerated and serves as the basis of a well-organized opposition movement which fields parliamentary candidates as independents.

The crisis has given U.S. President Barack Obama's administration a policy headache, forcing it to confront the consequences of Washington's long-term support for Middle East autocrats in exchange for security guarantees.

Some Western observers have expressed concern the Brotherhood could sweep to power and institute an Islamist regime that would be no more democratic than Mubarak's and might break Egypt's close alliance with Washington.

"Today we learned the Muslim Brotherhood decided to participate, which suggests they at least are now involved in the dialogue that we have encouraged," Clinton told National Public Radio from Germany.

"We're going to wait and see how this develops, but we've been very clear about what we expect," she said.

Obama spoke Saturday to several foreign leaders about the unrest in Egypt and underscored the need for "an orderly, peaceful transition, beginning now," the White House said in a statement.

Britain's Prime Minister David Cameron said he and Obama had agreed that "real, visible and meaningful change needed to start now ... including a path to free and fair elections."

Prime Minister Recep Tayyip Erdogan of Turkey -- Egypt's closest rival as a regional powerhouse -- called for an interim government to be appointed.

"A democratic transition should be ensured in the shortest possible time. If this is achieved, I believe the people will definitely accept such an outcome," he said, in televised remarks.

Under the U.S.-backed plan, Mubarak's powers would be scaled back enabling the creation of a transitional government headed by Suleiman to negotiate reforms with the opposition, the paper reported.