Crew in No Danger after ISS Issues Resolved, Says Russia 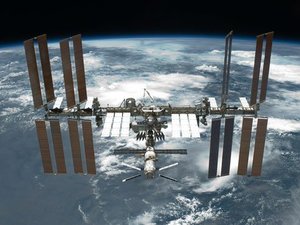 The International Space Station is now working normally with no danger to its occupants after the crew managed to resolve a series of technical issues overnight, Russia's space agency said Tuesday.

The crew aboard the ISS had reported issues with the oxygen production system, a toilet and the oven for preparing food.

"The problems that occurred on board the ISS during the night of 19-20 October have been fully resolved by the crew," Russia's space agency Roscosmos said in a statement.

"All the systems of the station are working well and there is no danger to the crew or the ISS."

The crew had reported overnight that the toilet on the Russian segment of the ISS was out of order, that the water systems used to supply oxygen to the crew were empty and that there were problems with heating food.

The issues arose as half of the six person crew -- NASA's Chris Cassidy and cosmonauts Anatoly Ivanishin and Ivan Vagner -- are preparing to leave for an arrival back on Earth early Thursday.

The issues were the latest technical problems to hit the ISS, whose crew have had to manage an array of troubles in recent weeks.

The orbital lab's first module was launched over two decades ago in 1998 and there have been growing concerns about its age.

Last week, the oxygen supply system in the Zvezda module of the Russian segment of the station failed. Roscosmos said at the weekend that this has now been repaired.

A small air leak that was detected in August has also now been patched up, after tea leaves from a torn tea bag helped alert the crew to the site of the leak.

Quoted by the RIA Novosti news agency last week, veteran Russian cosmonaut Gennady Padalka said that the Russian equipment on the ISS was well past its use-by date.

"All modules of the Russian segment are exhausted," said Padalka, who holds the world record for most days spent in space.

He added that the two-decade-old equipment should only be used for 15 years.