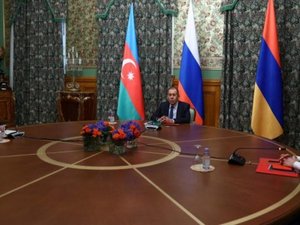 The foreign ministers of Armenia and Azerbaijan were in Moscow on Wednesday for meetings with Russia's top diplomat Sergei Lavrov as world powers seek to halt fighting over Nagorno-Karabakh.

The ministers were visiting the Russian capital, their respective ministries said as the pair are due to meet with US Secretary of State Mike Pompeo on Friday.

They have ruled out a trilateral meeting and will meet Pompeo separately.

Azerbaijani Foreign Minister Jeyhun Bayramov arrived in Moscow for "consultations with the Russian side," the ministry said in a statement.

His Armenian counterpart Zohrab Mnatsakanyan was set to meet with Lavrov in Moscow "to discuss the situation in Karabakh and the implementation of a ceasefire agreement," ministry spokeswoman Anna Nagdalyan said.

It was not immediately clear if the two diplomats would meet Lavrov jointly or separately.

World powers including Russia and the United States have expressed dismay that there has been no let-up in more than three weeks of fighting over the Nagorno-Karabakh region.

A truce was agreed in Moscow earlier this month after 11 hours of talks, but the accord had next to no impact on the ground.

Yerevan says 772 Armenian soldiers and 36 civilians have been killed in the flare-up of fighting.

Baku has reported 63 civilian casualties but has yet to disclose military losses.

Azerbaijan and the Armenian separatists who control its Karabakh region have been locked in a bitter impasse over the fate of the mountainous province since a war in the 1990s that left 30,000 people dead.

Their long-simmering conflict erupted again on September 27 in fierce clashes that raised the alarm over the failure of decades-long international mediation.

Along with France and Russia, the United States co-chairs the so-called Minsk Group of international mediators to the Karabakh peace talks since the 1994 ceasefire.

Baku says its forces have captured ground within Karabakh and that it also now controls Azerbaijani territory that had been held by Armenian forces.