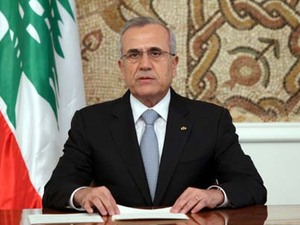 President Michel Suleiman’s visitors revealed that he will not approve a new government unless it reflects national unity, reported the Saudi al-Watan newspaper on Sunday.

Sources from the Baabda Palace told the Kuwaiti al-Anbaa newspaper that Suleiman is keen on overcoming this “critical and difficult” phase in Lebanon by maintaining national unity, respecting the constitution, and resorting to the national dialogue.

They stressed that the president is very eager to form a new government that would ensure the greatest possible participation of all political powers and that would be able to seriously tackle internal and external challenges, starting with protecting stability and security and eliminating all issues that may endanger Lebanon on the regional scene.

This requires that a one-sided “provocative” government should not be formed, but a new Cabinet should instead be comprised of qualified ministers whose expertise transcends political calculations.

On Saturday, Suleiman had hoped that Lebanese officials would cooperate with Premier-designate Najib Miqati to form a cabinet that would face administrative, economic and security challenges.

The government should be formed “based on the democratic principles that distinguish Lebanon,” he said.

The Cabinet should “confront the challenges in the administrative and economic fields,” the president stated, adding it should provide security to citizens.