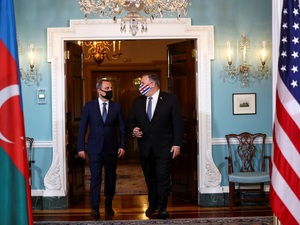 US Secretary of State Mike Pompeo on Friday urged an end to  fighting over Nagorno-Karabakh as he met his counterparts from Azerbaijan and Armenia but there were no signs of progress.

Pompeo, who had downplayed expectations and did not speak alongside either minister, "emphasized the need to end the violence and protect civilians," the State Department said.

He reiterated the US stance that the conflict should be resolved on the principles of "the non-use or threat of force, territorial integrity and the equal rights and self-determination of peoples," a statement said.

Two ceasefire bids have already failed in the month of fighting with Armenia acknowledging that Azerbaijan has made military gains on the ground.

Bayramov said he told Pompeo that the "Armenian occupation must end" of Nagorno-Karabakh, a mountainous region recognized internationally as part of Azerbaijan that is controlled by Armenian separatists backed by Yerevan.

"We are committed to finding a political solution (to) the conflict and ready to resume substantive talks immediately," Bayramov said in a statement after the talks.

But Armenia said that the aggressor was Azerbaijan, which it accused of intentionally targeting civilian sites.

He called the talks with Pompeo "very encouraging" and said he pressed concerns about Azerbaijan receiving weapons from its ally Turkey.

"The political and military encouragement of Azerbaijan to entertain the thought that there is a military solution to this conflict has been the role of Turkey," he said.

The United States has said it is neutral but Pompeo has criticized Turkey and in a recent interview described Armenia's actions as defensive.

Azerbaijan's ambassador in Washington, Elin Suleymanov, said that Pompeo "either misspoke or was misunderstood" and said during the meeting that the United States was impartial.

"We appreciate the American role. We also hope that America remains an honest broker, impartial broker, because that's a key for the talks," Suleymanov told reporters.

The United States is a co-chair of the so-called Minsk group on Nagorno-Karabakh alongside Russia and France.

Russia has been in the forefront of diplomacy between the two former Soviet republics.

Russian President Vladimir Putin said Thursday that the death toll was nearing 5,000 in what has become the worst flare-up in Nagorno-Karabakh in more than two decades.

Small groups of rival protesters backing Armenia and Azerbaijan confronted one another with slogans and signs outside the State Department, with a Diplomatic Security officer in a mask standing between them.

The United States has a large and politically active Armenian diaspora but also strategic ties with Azerbaijan, a rare Muslim-majority nation to have strong relations with Israel.