US Warns of Missile Strikes on Riyadh amid Yemen Rebel Attacks 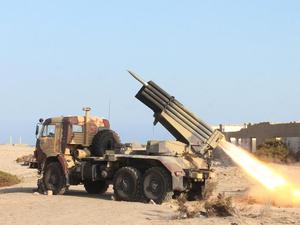 US officials on Wednesday warned of a possible strike on Riyadh, as the Saudi-led military coalition reported the interception of drones and missiles fired by Yemeni rebels towards the kingdom.

The Iran-linked Huthi rebels have stepped up attacks on neighbouring Saudi Arabia, mainly targeting southern provinces along their shared border.

The United States embassy in Riyadh warned American citizens in the capital to stay on "alert" and "take necessary precautions".

"The embassy is tracking reports of possible missiles or drones that may be headed toward Riyadh today," the embassy said in a statement on its website, without offering any details.

Huthi rebels have targeted Riyadh in the past with missiles and drones, with the coalition claiming to intercept most of them.

Riyadh lies more than 700 kilometres (435 miles) north of the border with Yemen.

Hours after the embassy statement, the coalition said six bomb-laden drones launched by the rebels towards the kingdom had been intercepted, according to the official Saudi Press Agency.

It did not specify the target.

The rebels launched the drones "deliberately and systematically to target civilians" in the kingdom, said coalition spokesman Turki al-Maliki.

Two other targets were destroyed in the air, it added.

Yemen is mired in civil war between the Huthi rebels, who control the capital Sanaa, and a beleaguered internationally recognised government supported by the Saudi-led coalition.

The attacks come amid intense fighting in recent months as the Huthis try to seize control of oil-rich Marib province -- the government's last nothern stronghold, which lies 120 kilometres (75 miles) east of Sanaa.

The coalition, which is backed by Western powers including the US, intervened in support of the Yemeni government in 2015 after the Huthis seized the capital Sanaa but it has struggled to oust the militia.

Since then, tens of thousands of people, mostly civilians, have been killed and millions displaced in what the United Nations has called the world's worst humanitarian disaster.