Warring Sides in Geneva for Talks over Karabakh 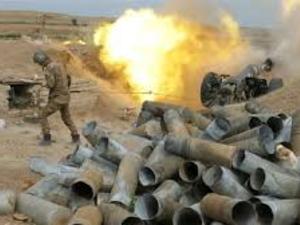 The foreign ministers of Armenia and Azerbaijan on Friday were in Geneva for talks with international mediators in a new effort to negotiate a ceasefire over the disputed Nagorno-Karabakh region after weeks of fighting.

Yerevan said a meeting of Armenian Foreign Minister Zohrab Mnatsakanyan with the Minsk Group mediation co-chairs had started in Geneva.

Azerbaijan said in a terse statement earlier Friday that its Foreign Minister Jeyhun Bayramov was in Geneva on a working visit.

A new round of diplomatic talks was initially set to take place in Geneva on Thursday but they were postponed amid a new spike in fighting.

It was not immediately clear if the foreign ministers of Armenia and Azerbaijan planned to meet face-to-face on Friday.

The Geneva talks are mediated by the Minsk Group of Russia, France and the United States, which have tried since the 1990s to bring a negotiated settlement to the conflict.

Azerbaijan and Armenia have been locked in a bitter conflict over Karabakh since Armenian separatists backed by Yerevan seized control of the mountainous province in a 1990s war that left 30,000 people dead.

The current clashes broke out on September 27 and fighting has persisted despite repeated international attempts to secure a ceasefire.

The fighting has intensified in recent days including with renewed shelling and rocket attacks on civilian areas.

Earlier this week Azerbaijani President Ilham Aliyev said he was not against the new round of talks in Geneva but appeared to downplay their significance.

"There have been a lot of meaningless meetings over the past 28 years," he said.

More than 1,200 people from both sides have been reported dead since the fighting began, and thousands forced from their homes.

Azerbaijan has not released military casualty figures and the death toll is believed to be higher, with Russian President Vladimir Putin saying last week close to 5,000 people had been killed.