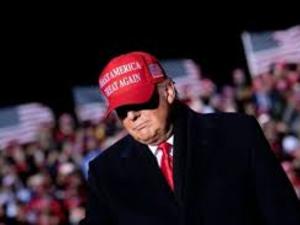 Twitter and Facebook on Monday labeled as "misleading" an election eve post by U.S. President Donald Trump claiming mail-in ballots in the key state of Pennsylvania would lead to "rampant" fraud and street violence.

The U.S. Supreme Court dealt Trump's reelection campaign a blow last week when it ruled to allow mail-in ballots in the swing state to be counted up to three days after the actual election night on November 3.

The Republican leader has been vocal about his opposition to mail-in ballots, often claiming without evidence that the process will be rigged against him.

"The Supreme Court decision on voting in Pennsylvania is a VERY dangerous one. It will allow rampant and unchecked cheating and will undermine our entire system of laws," Trump said in a post on both Twitter and Facebook.

"It will also induce violence in the streets. Something must be done!"

Users were required to click through the warning message to see the tweet. Twitter had also added a link to the bottom of Trump's post where people could "learn how voting by mail is safe and secure."

Facebook also added a label to Trump's post, which said, "Both voting by mail and voting in person have a long history of trustworthiness in the U.S. Voter fraud is extremely rare across voting methods."

Twitter in recent months has marked a number of Trump tweets as "misleading" or "glorifying violence," including a post on anti-racism unrest in Minneapolis in May.

Twitter has also appended fact-checks to two of the president's previous tweets on mail-in voting, sparking a furious reaction from Trump and his right-wing surrogates who accuse social media firms of bias against conservatives.