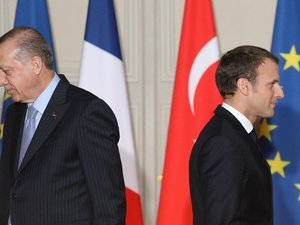 France on Thursday condemned what it said were "declarations of violence" by Turkish President Recep Tayyip Erdogan, and raised the possibility of new sanctions against Ankara.

Erdogan has been feuding bitterly with French President Emmanuel Macron on a number of geopolitical flashpoints and, more recently, France's fight against radical Islam.

"There are now declarations of violence, even hatred, which are regularly posted by president Erdogan which are unacceptable," French Foreign Minister Jean-Yves Le Drian told Europe 1 radio.