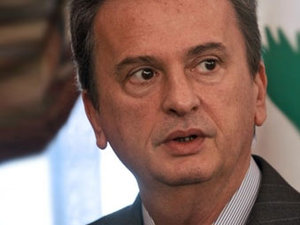 "Lebanese banks both at home and abroad ... will not take any action, especially as concerns Syria, that could expose any of our banking partners or put them in a position whereby they have breached regulations in their countries," said Salameh.

Lebanon was fully committed to the implementation of international regulations on banking transparency, he told a conference in Beirut organized by the International Finance Corporation.

"The central bank will seriously investigate all complaints (of breaches) and will not hesitate in taking any necessary measures," he added.

Lebanon has come under international pressure to abide by international sanctions on neighboring Syria, which include freezing government assets and suspending cooperation with Syria's central bank and some other banks.

Salameh has said Syria has no funds deposited in Lebanon's central bank and Lebanese banking officials say they have adopted strict measures to ensure compliance with the sanctions.

These measures include strict control over the transactions of Syrian clients and close monitoring of Syrians who wish to open new accounts.

Salameh on Tuesday attributed a decline in local economic growth to the repercussions of "rumors" linking Lebanon's banking sector to Syria.

"Growth in 2011 dropped due primarily to ... rumors targeting its banking sector in addition to revolutions and tensions across the region."

The United States, which lists Hizbullah as a “terrorist” group, last year filed a lawsuit against the Lebanese Canadian Bank, accusing it of laundering hundreds of millions of dollars in drug proceeds from an alleged cocaine trafficker with ties to the Lebanese party.

Lebanon's government, which is led by Hizbullah and its allies, has sidestepped taking a firm stand on the Syria crisis in what observers say is a bid to avoid potential sanctions or a spillover of the violence.

The United Nations estimates more than 5,400 people have been killed in Syria since March as the regime of President Bashar al-Assad cracks down on a popular revolt.