Three Dead in Axe and Gun Attack at Russian Military Base 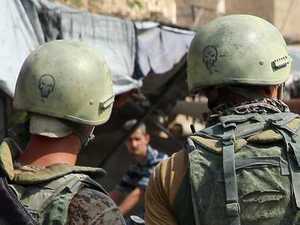 A Russian serviceman Monday hacked an officer to death with an axe and shot two fellow soldiers dead at a military base near the southern city of Voronezh, investigators said.

They identified the assailant as private Anton Makarov who attacked the officer at the Baltimore military airfield near Voronezh at 5.30 am local time.

"In order to get hold of a service weapon Makarov killed an officer with an axe," the Investigative Commitee, which probes serious crimes, said in a statement.

He then started shooting his fellow servicemen, killing two and wounding one, the statement said.

An unidentified source told the Interfax news agency that the shooting started when an altercation broke out between the soldier and an officer during an inspection.

The soldier "grabbed a handgun" from the officer's holster and fired, Interfax reported.

Investigators said the soldier had fled the scene.

Shootings at military facilities in Russia are not uncommon and rights groups have sounded the alarm over brutal hazing rituals that were routine in the 1990s but have improved in recent years.

In October last year, a Russian soldier opened fire on troops at a military base in Siberia, killing eight and injuring two in an attack he blamed on hazing that made his life "hell".

Military service is compulsory in Russia for men aged between 18 and 27, but many people use loopholes to evade conscription.

A Russian serviceman killed three colleagues in a shooting Monday on a base near the southern city of Voronezh, news agencies reported citing the military.

"Three servicemen sustained lethal injuries as a result of the attack. The command of the military unit, acting together with law enforcement agencies, is working to track down and detain the assailant," Russia's Western Military District said in a statement carried by Interfax.