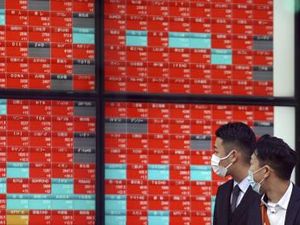 Asian markets rallied Tuesday on news that a vaccine candidate had been 90 percent effective in treating patients, fuelling hopes it could begin to be rolled out this year and bring an end to a pandemic that has battered the world economy.

Wall Street and European shares soared with oil prices, while safe-haven assets tumbled Monday when US pharmaceutical giant Pfizer and its German partner BioNTech announced results of their Phase 3 trial.

The news provided a massive boost to investors who were already in a strong buying mood after Joe Biden's US election win at the weekend removed a large amount of uncertainty from trading floors.

"The clearing of the election fog has permitted underlying market fundamentals to come back into focus and the most recent vaccine news suggests a 'return to normality' should be coming sooner rather than later," said Seema Shah of Principal Global Investors.

"All the chips are starting to line up, and market sentiment may be in the early stages of a burst of positive energy."

Singapore and Bangkok each soared more than three percent with Mumbai and Jakarta up more than one percent. Tokyo, Hong Kong and Sydney also posted healthy gains.

Manila rocketed more than five percent, with traders also welcoming signs the Philippine economy is improving despite a third straight quarter of contraction.

Seoul and Wellington were also up, though Shanghai and Taipei fell.

Gains were led by companies that have been hammered for most of the year by lockdowns, particularly airlines. Japan Airlines cruised more than 20 percent higher, Qantas jumped more than eight percent and Cathay Pacific piled on 13 percent, as did Singapore Airlines.

But tech firms which have benefitted from people being kept at home retreated, as did medical equipment makers. Gaming giants Sony and Nintendo also tanked, just as the sector prepares for the holiday season and the next era of computer consoles, with Microsoft putting its new Xbox on sale.

Oil prices dipped after Monday's surge, while the safe-haven yen edged back slightly -- although it was still well off its levels just above 103 to the dollar earlier Monday. Gold struggled to battle back after losing five percent.

Tai Hui, at JP Morgan Asset Management, said in a note: "This offers a ray of hope that the market did not hesitate to take advantage of. Investors’ reaction... is in line with our expectations of what would happen if there are signals that some normality can return to our lives."

The breakthrough on a vaccine comes as several European nations endure fresh lockdowns to contain a second wave of the virus, which has infected more than 50 million people globally and killed more than a million.

It has fanned hopes that the world economy can begin to get back on track after a year in which it has been shattered with tens of million left jobless, companies going under and nations plunging into recession.

"The bull market just received 'a by George, we've done it' shot in the arm as the vaccine will genuinely be a game-changing panacea for global healthcare concerns," said Axi strategist Stephen Innes.

However, he warned that while there was much euphoria, there were fears US lawmakers would now pass a more modest stimulus.

Biden's win provided a boost to investors looking for less chaos after four years of Donald Trump, and Republican success in holding on to the Senate will limit attempts by Democrats to push through big tax and regulatory changes.

However, they have always been against a new big-spending package and are unlikely to budge.

"Those heartening developments on the vaccine front are giving way to worries that lawmakers will pass a smaller stimulus package, and the next move for central bankers will not be lower," Innes added.

"It is just not the vaccine that will hold back US infrastructure spending. There is also some cynical objection from bipartisan politicians who are not keen to do anything to boost a political rival."