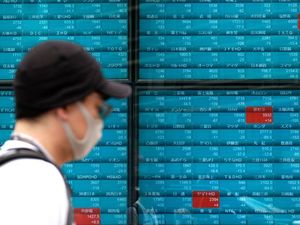 Equities were already in the ascendant at the end of last week as it appeared the former vice president was looking on course to wrest control of the White House from Donald Trump and provide more certainty to world affairs.

But US pharma giant Pfizer and Germany's BioNTech provided rocket fuel Monday when they said their candidate for a Covid-19 vaccine had been 90 percent effective, lifting hope for a move towards normality for the planet.

Stocks that had been beaten down for months owing to lockdowns around the world rallied, while those that had benefited -- such as tech titans and makers of medical equipment -- took a hit.

And while the surge appeared to stutter in New York on Tuesday -- the Dow jumped but the S&P 500 slipped -- Asia was again positive.

Singapore and Manila, though, edged back on profit-taking after soaring Tuesday.

Shanghai was also down, while traders were keeping tabs on China's massive Singles Day shopping sale, which will be used as a gauge of consumer sentiment as the country emerges from the virus.

Safe havens that are usually the go-to in times of crisis, such as the yen and gold, were also down from their levels of a week ago, while higher-yielding currencies built on gains against the dollar.

And hopes for a lift in demand provided fresh upside for oil prices, which climbed more than one percent a day after jumping more than three percent.

However, observers warned that any vaccination would likely take some time -- with billions around the world needing the drug -- while the economy remains in trouble and the disease continues its rampage.

"You still have a tremendous amount of uncertainty out there, and while equities may continue to climb a wall of worry, the stock market is still subject to the rules of gravity," Jonathan Boyar, of Boyar Value Group, said.

With logistics proving a headache, the economic benefits from the vaccine likely will not be seen until the second half of next year, observers warned.

CMC Markets analyst Michael Hewson said: "This week’s news on a vaccine, while welcome, doesn't change the fact that France, Germany and the UK are still in the middle of partial economic lockdowns, while infection rates in the US have continued to rise.

"For now markets appear content to ignore this and are now focussing on the potential green pastures of a post pandemic world."

Traders are also keeping tabs on Washington where Biden is beginning to put together his team, with a focus on fighting the coronavirus.

The battle he faces has highlighted by a surge in new cases across the country in recent weeks with the total now at 10.2 million.

The figures raised concerns of new economically painful containment measures, which Americans can ill afford as lawmakers struggle to agree a stimulus package, while there are also fears any new deal will be much smaller than previously hoped.