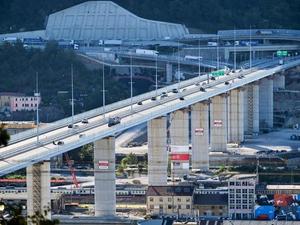 Italy's financial police have arrested the former boss of motorway operator Autostrade in an investigation linked to the deadly collapse of the Genoa bridge, media and officials said Wednesday.

Police said they had imposed measures including house arrest on three former and three current managers of Autostrade, a subsidiary of Italian infrastructure group Atlantia.

News reports said Giovanni Castellucci, the former boss of both Autostrade and Atlantia, was among those under house arrest.

The financial police said the allegations, part of an investigation running alongside the main probe into the bridge collapse, regarded transport safety and fraud.

Autostrade was responsible for maintenance on the Genoa bridge, which collapsed in August 2018, killing 43 people.

The officials are suspected notably of ignoring defects in the barriers on the bridge, despite the potential risk to road safety, particularly in strong winds.

Castellucci's lawyers emphasized that the  arrests were part of a "completely separate" case from that of the bridge collapse.

In a statement carried by Italian media, they expressed confidence that the investigation would find he had done nothing wrong.