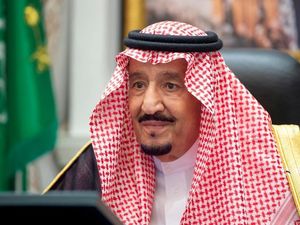 Saudi Arabia's King Salman urged world powers Thursday to take a "firm stance" against its arch-rival Iran, as expectations mount that US President-elect Joe Biden will seek to revive a 2015 nuclear deal with Tehran.

"The kingdom calls on the international community to take a firm stance towards the Iranian regime," the king said in his annual address to the Shura Council, the top government advisory body.

"This firm stance must guarantee that the Iranian regime is prevented from obtaining weapons of mass destruction, the development of its ballistic missile programme and threatening peace and security," he added in a speech delivered in the early hours.

Sunni powerhouse Saudi Arabia and Shiite Iran are locked in a decades-old tussle for supremacy in the Middle East, and are on opposing sides in regional conflicts from Syria to Yemen.

Riyadh appears wary of Biden's pledge to revive a 2015 nuclear pact between major powers and Iran, a landmark deal that was negotiated when he served as vice president under Barack Obama.

The agreement was abandoned by President Donald Trump, a close ally of Saudi rulers whose "maximum pressure" campaign against Iran was welcomed by the kingdom.

The king condemned Iran-linked rebels in neighbouring Yemen for repeatedly firing on civilians in the kingdom with drones and ballistic missiles.

Saudi Arabia leads a military coalition against the rebels in a five-year-old conflict that has killed tens of thousands of people and driven millions from their homes. The UN has described the conflict as the world's worst humanitarian disaster.

King Salman also reiterated his support for a two-state solution to the Israeli-Palestinian conflict.

He did not address recent normalisation deals between Israel and Saudi allies Bahrain, the United Arab Emirates and Sudan.

Despite its clandestine links with Israel, Saudi Arabia has publicly refused to officially recognise the Jewish state without a resolution to the Palestinian issue.

The king's speech comes just days before the G20 summit, which will be hosted virtually by Riyadh on November 21 and 22.