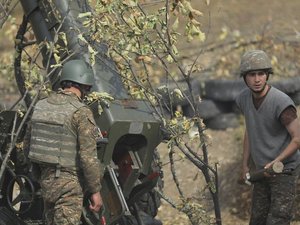 Armenia arrested 10 prominent opposition figures on Thursday for their role in violent unrest that erupted after the government signed a peace deal with Azerbaijan that ceded swathes of territory.

The politicians were arrested for organising "illegal violent mass disorder", prosecutors said, hours before critics of Prime Minister Nikol Pashinyan were due to demonstrate again in the capital Yerevan against the accord to end fighting over the Nagorno-Karabakh region.

Pashinyan announced the Russian-mediated peace agreement with arch-foe Azerbaijan in the early hours of Tuesday, ending more than six weeks of intense fighting that left more than 1,400 dead and displaced tens of thousands.

Armenia agreed to cede parts of the disputed region to Azerbaijan as well as other territories it had controlled since the 1990s.

Pashinyan's decision to sign the peace accord sparked fury in Armenia, where demonstrators stormed and ransacked government buildings.

Among those arrested were Gagik Tsarukyan, leader of the Prosperous Armenia party, and Ishkhan Sagateyan of the Dashnaktsutyun party, prosecutors said.

They face up to 10 years in jail if convicted.

The mountainous region declared independence from Azerbaijan nearly 30 years ago but it has not been recognised internationally, even by Armenia.

Fighting between Azerbaijan and the Armenian separatists erupted on September 27 and persisted despite efforts by France, the United States and Russia to broker three separate ceasefires that collapsed as both sides accused the other of violations.