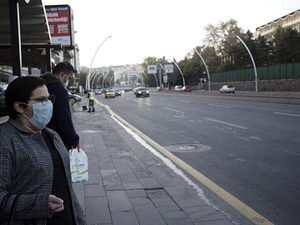 Turkey's interior ministry has banned smoking in public places across the country to curb the spread of COVID-19.

In a statement late Wednesday, the ministry said smoking would be banned in busy streets, bus stops and public squares when necessary. It said the nationwide mask mandate in public spaces, which has been in effect for several months, must be followed at all times and smokers were routinely violating the mask rule.

The ministry also said provinces can decide to impose curfews on senior citizens above the age of 65 if they are seeing increases in the number of critical patients. The governors of Istanbul and Ankara have already reintroduced measures this week, allowing senior citizens to leave their homes only between 10 a.m. and 4 p.m.

Turkey has seen a spike in infections since lifting partial lockdowns and reopening businesses in late May. The latest Health Ministry figures show 86 new fatalities in the past 24 hours, bringing the death toll to 11,145.