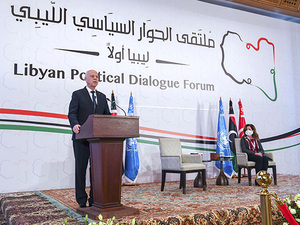 Libyans at UN-led talks were to discuss the powers of a proposed transitional government Thursday, the UN said, as it steps up efforts to end years of conflict in the country.

The talks, between 75 delegates selected by the UN to represent existing institutions and the diversity of Libyan society, take place in parallel with talks between former rival military delegations inside the country to fill in the details of a key October ceasefire deal.

Oil-rich Libya has been gripped by chaos since the 2011 ouster and killing of longtime dictator Moamer Kadhafi, with rival administrations in the east and west vying for power.

The latest push for peace comes months after forces backing the Tripoli-based Government of National Accord (GNA) staged a withering June pushback against the forces of military strongman Khalifa Haftar, who is allied with a rival administration in the east and had attempted to seize Tripoli.

The Tunisia talks, which build on the relative calm on the ground, aim at creating a roadmap towards elections and appointing a temporary government to oversee the transitional period.

The administration will be charged with providing vital services to a country torn apart by war, economic crisis and the coronavirus pandemic.

The UN is also convening meetings of a joint military commission with five representatives from each side near the ceasefire line in Sirte, the coastal hometown of Kadhafi.

Williams said talks would continue there on Thursday, with a subcommittee on the withdrawal of foreign forces.

An array of foreign powers have backed Libya's warring parties, notably Russia and the United Arab Emirates on Haftar's side and Turkey on the side of the GNA.

The GNA on Tuesday accused the Wagner group, a Russian paramilitary organisation accused of backing Haftar, of preventing its delegation from landing at the Qardabiya airbase south of the city.