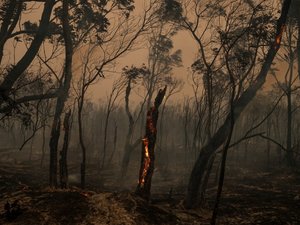 Climate change is already buffeting Australia with extreme bushfires, droughts and cyclones, and the fossil-fuel reliant country should brace for worse to come, according to the country's top science and weather agencies.

The government's top science body, CSIRO, and its Bureau of Meteorology released a report Friday outlining a sobering future for the vast continent nation that was devastated by bushfires in 2019-2020 after its hottest and driest year on record.

The blazes burned an area roughly the size of the United Kingdom, leaving 33 people dead, killing or displacing nearly three billion animals and costing the economy an estimated US$7 billion.

"Ten or 20 years from now, we won't be saying 2019 was really hot -- 2019 will just be usual. There will be nothing exceptional about 2019," CSIRO Climate Science Centre director Jaci Brown told public broadcaster ABC.

"In fact, in the next century, this decade will seem cool."

The State of the Climate report, which comes out every two years, found less rain is falling in Australia's southwest and bushfire-ravaged southeast, even as it increased in the north -- hit by major flooding and destructive tropical cyclones in recent years.

Oceans have warmed by around one degree Celsius over the same period, causing acidification and more frequent marine heatwaves, the report continued.

The report predicted sea levels will continue to rise in line with global trends while tropical cyclones become less frequent but more intense.

"Climate change is happening now and it will continue to happen," Brown told the ABC.

The CSIRO has previously called for Australia to tap "abundant natural resources and extensive know-how" to become "a world-class clean energy and technology provider", putting it at odds with the conservative government, which has slow-pedalled measures to tackle climate change.

Prime Minister Scott Morrison has repeatedly played down the link between climate and the bushfires, and has committed to keeping Australia as one of the world's leading fossil fuel exporters.

But Australians are increasingly concerned about climate change, with a recent poll by Sydney's Lowy Institute showing almost 90 percent believing it is a critical or important threat.

Survey respondents placed drought and water shortages exacerbated by climate change above even the coronavirus pandemic and the global economic crisis as the top threat facing the country.