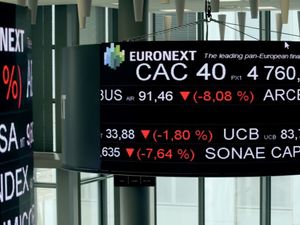 Asian bourses, however, took a hit as traders feared that another wave of Covid-19 lockdown measures will throw a shaky economic recovery off course.

However, London dropped 0.5 percent nearing midday on the back of the rising pound, which hits share prices of multinational companies who earn vast sums in dollars.

"Equity markets started off in the red this morning but they have been driving higher ... and most European indices are in positive territory," said CMC Markets analyst David Madden.

"The pandemic might not have the same negative impact on equities that it used to, seeing as there has been great progress made with respect to the drug that Pfizer and BioNTech are developing."

Equities have reaped bumper gains this week thanks to the promising coronavirus vaccine trial and Joe Biden's US election victory.

US pharma giant Pfizer and Germany's BioNTech on Monday revealed that their candidate for a Covid-19 vaccine had been 90 percent effective.

However, investors remain mindful that the killer disease remains rampant.

Several European economies including England and France have already been all but shut down to contain a fresh eruption, but they continue to record frighteningly high numbers of new cases -- raising the possibility the measures could be extended.

And major US cities including New York and Chicago are being forced to act as leaders worry that the northern hemisphere winter will be more deadly than spring.

Hong Kong and Shanghai were also hit by news that Donald Trump had signed an order banning Americans from investing in Chinese firms that could help the country's military and security apparatus.

The executive order, due to take effect on January 11, said Beijing obliges private firms to support these activities and through capital markets "exploits United States investors to finance the development and modernization of its military".

The prohibition targets a list of 31 companies, including telecoms, aerospace and construction firms, according to reports.

Adding to the downbeat mood are concerns that a new US stimulus is unlikely to be passed before Biden moves into the White House.

With US President Donald Trump continuing to reject defeat and concede, reports said he has stepped back from talks on a new round of spending for the beleaguered economy.