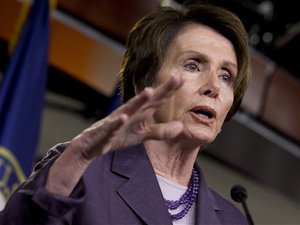 The top Democrat in the U.S. Congress on Friday joined in criticism against Facebook for allowing disinformation to spread over the social media platform, saying it was "part of the problem."

Nancy Pelosi, speaker of the House of Representatives, made the comments in response to a question about efforts being made by tech giants against disinformation spreading online during the presidential election won by Democrat Joe Biden.

"I'm not a big fan of Facebook," Pelosi told journalists.

"I don't know what they have been doing but I know they've been part of the problem, all along."

Since U.S. news media projected Biden the winner over Republican incumbent Donald Trump on Saturday, the outgoing president and his supporters have been spreading claims of massive electoral fraud without evidence.

Facebook and Google have also decided to maintain their bans on political advertising in the United States pending certification of the results.

However, social media companies have been accused by a wide range of voices of not doing enough and allowing false information and hate speech to spread for too long.

Many from the right wing allege censorship when it comes to the warning messages and other actions taken by tech companies.

The incoming Biden administration will likely face questions over whether action is needed to address the issue.

One issue being debated is a section of a law that exempts social media companies from legal action for content posted by their users apart from certain exceptions.

I remember when Facebook started, some friends of mine asked me why am I not on Facebook, my answer was simple : I am not an exhibitionist, nor a voyeur .

I just see the post i am so happy the post of information's. So I have really enjoyed and reading your blogs for these posts. Any way I’ll be subscribing to your feed and I hope you post again soon.your website article is so unique and good and This is my News feeds website please click here to visit my website and please support me Hindi Times.co.in

I remember when Facebook started, some friends of mine asked me why am I not on Facebook, my answer was simple : I am not an exhibitionist, nor a voyeur .