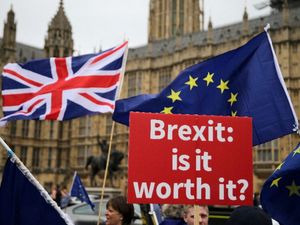 A top EU diplomat warned Monday it was getting dangerously late to secure a post-Brexit trade deal as a week of crucial talks began in Brussels.

"Let's see if there will be an agreement. We can't tell at this stage whether this will be by the end of this week or whenever - or at all," he said.

"This is already getting extremely late," the envoy told reporters on condition of anonymity.

The EU's chief negotiator Michel Barnier and his UK counterpart David Frost are in Brussels in hopes of securing an agreement after eight months of talks.

The clock is ticking towards December 31 when a post-Brexit transition phase ends and the UK and Europe will need a trade deal to govern ties -- or face economic chaos.

A deal is needed early enough before that date to allow the ratification by European Parliament, which meets for the last time on December 16.

The diplomat warned that "creative solutions" would be needed if a deal was delivered too late for MEPS to have their say.

"We remain determined and we will show a lot of patience and respect in trying to strike an agreement," said EU spokesman Daniel Ferrie.

Officials on both sides of the talks say negotiators are waiting for the opposite side to make a big move on the tough issues that have stymied the talks since the start.

For the UK, the EU must rescind on its hopes of keeping permanent wide access to British waters for European fisherman.

The EU meanwhile is still waiting for London to lay down guarantees for fair competition on matters such as the environment, health and state aid.

"We are very strict on our conditions. They are acceptable," said Thierry Breton, France's representative to the European Commission that is spearheading the talks for the EU.

The talks entered this most crucial phase as a cabinet crisis embroiled the Johnson government, which is also fighting the second wave of the coronavirus pandemic.

An EU leaders video call on Thursday to discuss the pandemic was considered as a defacto deadline, though the likelihood of a full fledged deal by then seemed increasingly unlikely.

"Although many officials believe this week is critical, we aren't expecting a breakthrough," said Mujtaba Rahman, managing director for the Eurasia Group risk consultancy.

"It's more likely they will run until the end of the month," he added.