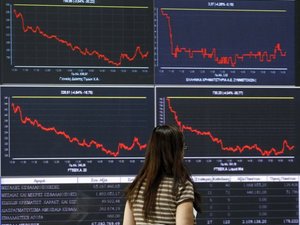 European stock markets retreated Tuesday as a rally based on raised vaccine hopes petered out.

In Asia, equities closed mostly higher with investors there catching up with news from U.S. biotech group Moderna that its vaccine candidate was 94.5 percent effective in preventing Covid-19.

The dollar was down versus main rivals, while sterling gained on hopes of a post-Brexit trade deal between the European Union and Britain as key talks began in Brussels.

European stock markets meanwhile headed south amid surging infections across the U.S. and Europe and concerns that Washington lawmakers are unlikely to pass any big stimulus package before the end of the year.

The mood among dealers has been upbeat this month after Joe Biden's U.S. election win paved the way for a little more certainty on the world stage and pharmaceutical giants Pfizer and BioNTech announced their virus vaccine had been 90 percent effective.

The news fanned hopes the global economy could soon begin to get back on track.

"The euphoria created by the presidential election result and the vaccine announcement will give way to a more sober analysis of how long and smooth the road to recovery will be," said Chris Iggo at AXA Investment Managers.

Hopes for a US stimulus remain slim. Biden on Monday called for Congress to "come together and pass a Covid relief package like the Heroes Act" that helped the economy weather the initial phase of the outbreak.

But Republican Senator Richard Shelby poured cold water on that, saying: "We're not going to pass a gigantic measure right now -- and the question is will we pass it later? Doubtful."

Federal Reserve vice chair Richard Clarida, however, said the central bank could expand its vast bond-purchase scheme to support growth, adding that it "is committed to using all of our available tools".